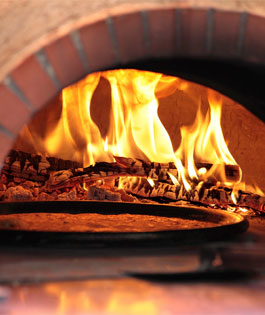 Goodfella’s Revolving Brick Oven has seen a lot of use over the years baking everything from Thanksgiving Turkeys to bread, to chicken and steak and even  the world-famous Vodka Pizza!

Yes, Scot Cosentino was responsible for creating the “Vodka Pie” back 1992 when at the end of long pizza making shift he decided to dip some pizza crust in a vodka sauce and the rest became pizza history. They soon won a national pizza title with the Vodka Pie and published the recipe, which led to a national trend of Vodka Pizza from one coast to the other. The point of the little story is that brick ovens are for use and the more you experiment the greater the chances of you coming up with a winner 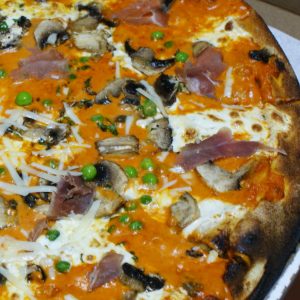 The art of pizza making requires a bit of experimenting and trying new things. The funny thing about the Vodka Pie was that none of the customers wanted to try it because of the “pink sauce” originally until it was sampled throughout the place and became a best seller and signature pizza. Today you will find the Vodka Pie all over the country with many interpretations as well. But there will always be only one Original Vodka Pizza! By the way, you can still stop in at The Original Goodfellas and try the pie that started the craze!